Committed to keeping our community informed

Home to our residents, businesses and growing community.

Building for the future.

With a community rich in culture and history we look forward to the next 100 years.

Muskingum County is located east of Columbus, Ohio, our state capital. Ebenezer Zane made a settlement here when he stopped on his way from Wheeling, now West Virginia, to Maysville, Kentucky. He was clearing a road called Zane's Trace that ran across Ohio.

Zanesville was established on March 1, 1804, by Zane's son-in-law, John McIntire. He stayed in Zanesville and developed what would become Ohio's second capital from 1810- 1812.

Muskingum County was a hub of river traffic and is famous for the "Y" Bridge which was built at the confluence of the Muskingum and Licking Rivers. The county got its name from the Native American term , Moos-kin-gung meaning "a town on the side of the river." Some claim the natives called it the "Elk Eye River."

Muskingum County contains a land area of 673 square miles, with Zanesville as its county seat. The population was listed at 84,884 in the 2010 census.

Muskingum County offers many interesting historical, cultural and geographical features. We hope you will come visit us personally, but in the meantime, please enjoy our website. 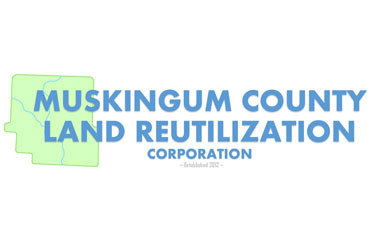 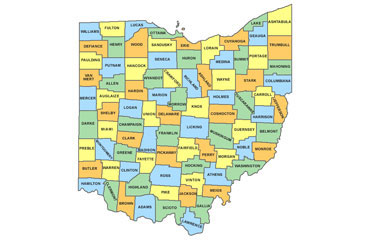 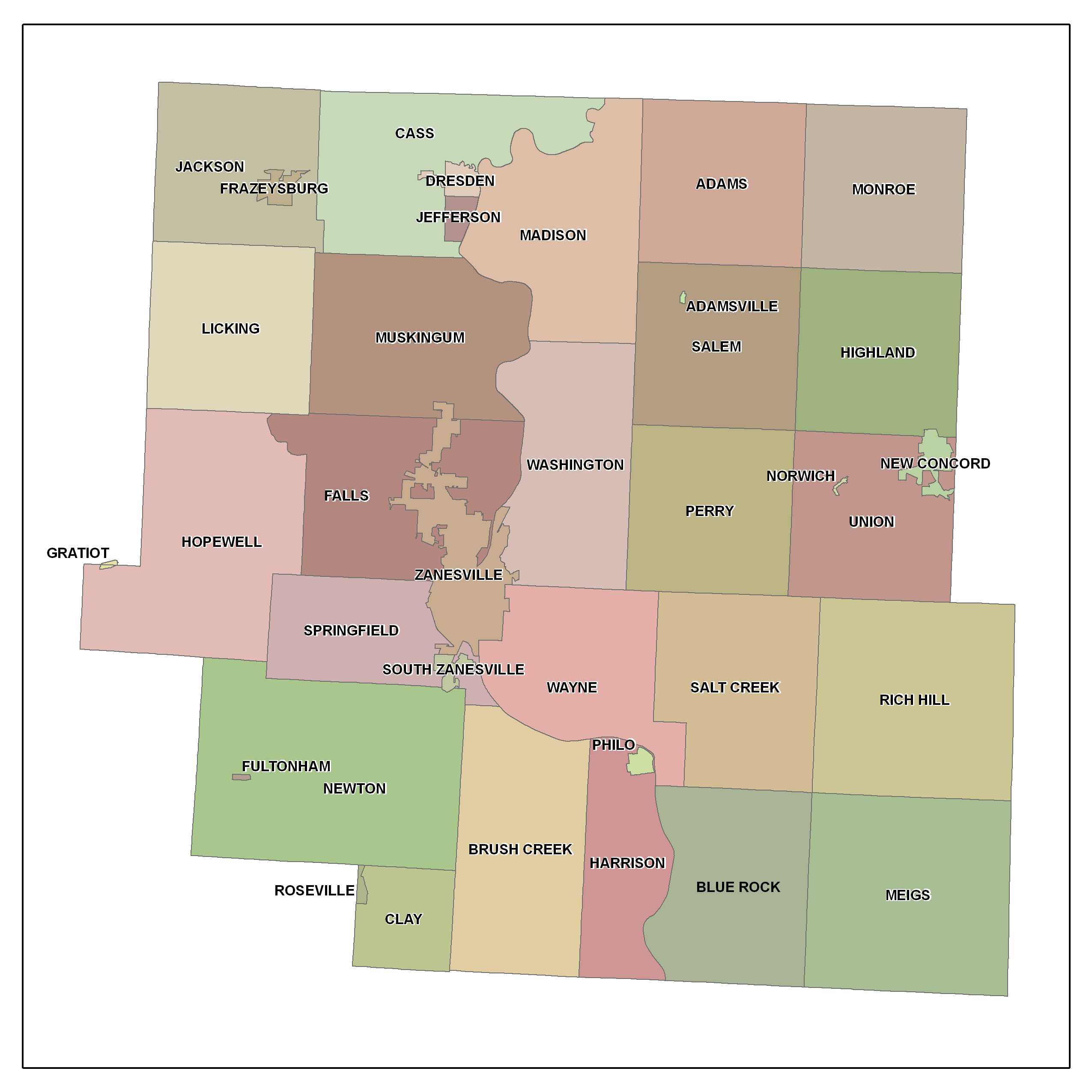 On January 7, 1804, the Ohio government authorized the creation of Muskingum County. The county's name came from an Indian word for "near the river". The Muskingum River flows through the county. Located on Zane's Trace, the county grew quickly. In 1810, Zanesville, the county seat, became Ohio's capital, replacing Chillicothe. The main reason for this change was an attempt by Democratic-Republicans in Ohio to solidify their control over eastern Ohio. The capital remained in Zanesville for only two years, returning to Chillicothe in 1812, before moving permanently to Columbus in 1816.

Muskingum County is located in eastern Ohio. It is predominantly rural, with less than one percent of the county's 665 square miles consisting of urban areas. With a population of 25,586 people, Zanesville was the county's largest community in 2000. The next largest urban area, Falls Township, had only 8,585 residents that same year. Muskingum County experienced a slight increase in population between 1990 and 2010, raising the total number of residents to 84,884 people. Muskingum County seems to be remaining stable in population. The county averages 129 people per square mile.

The largest employers in Muskingum County are retail establishments, with manufacturing businesses a close second. The most important industry in the county during the second half of the nineteenth century was art pottery manufacturing. Samuel A. Weller became the most important manufacturer in 1890, when he began production in Zanesville. Most of his early products included simple items like flowerpots, cuspidors, and tableware. By 1905, more than five hundred workers found employment in Weller's plant. These workers produced three boxcars full of pottery every day, making Weller the largest manufacturer of pottery in the world by the 1910s. Pottery manufacturing remains a vital component of Muskingum County's economy today. In 2003, many of Zanesville's residents found employment in various pottery establishments, including Fioriware Art Pottery, Zanesville Pottery and China, Incorporated, and Robinson Ransbottom Pottery in nearby Roseville. Other businesses also flourish in the county, such as Volvo Trucks and Custom Vans of Zanesville. The county also enjoys a booming tourism industry, due to the pottery manufacturers, as well as the Longaberger Company, which produces baskets in nearby Frazeysburg. People across the world collect Longaberger baskets.

Zanesville, Ohio came into existence when Colonel Ebenezer Zane contracted with congress to build a road from Wheeling, West Virginia to Maysville, Kentucky. In return for this road known as Zane's Trace, Zane was to receive three 640 acre tracts of land. In addition, he was to establish ferries where his Trace crossed important rivers.

The first settlers in Zanesville were Ferrymen Henry Crooks and William McCulloch who, in 1797 , operated ferries across the Muskingum River. Early ferries were planks secured to canoes.

The first bridge in Zanesville was built by the Putnam Yankees in 1813 and named the Third Street bridge. Moses Dillon and others planned to build a bridge "from the point opposite Main Street of Zanesville, to an island at the mouth of the Licking, thence north and south each way across the mouth of Licking Creek."

That first Y bridge was constructed of wooden trestles and stone with logs and planks bolted to the trestles. The center pier was made of limestone and above it stood the toll house.

On November 16, 1814, the Muskingum Messenger reported: Muskingum and Licking bridge. This grand and important work is now passable. Great credit is due to Mr. Rufus Scott, the architect. Now the south and north sides of Licking Creek were joined with Zanesville on the east side of the Muskingum River.

After the first Y Bridge fell into the river, the stockholders of the Muskingum and Licking bridge built a second three-branched structure on the same sight in 1819: The designer was a strong believer in "camber" in a truss, and his plan gave the structure a rolling prairie appearance.

A sketch of this bridge appeared on a five-dollar bill issued by the old Muskingum Bank of Zanesville. The artist represented the bridge as being completely covered but old records show there was not enough money to finish covering the bridge.

Stephen H. Long, in 1825, described the structure as an "Uncouth mess, contrasting well with the magnificence of the scenery .The bridge appears destitute of solidity, and will probably soon be replaced by a more elegant and permanent one."

About 1830, The National Road, a narrow ribbon of crushed limestone, reached Zanesville from Cumberland, MD. Surveyors laid out a new road due westward.

The piers were reinforced, but it was necessary to plan a new bridge by the spring of 1832.

The second Y bridge was not strong enough to bear the heavy traffic that poured in from the new roads into Zanesville. When the structure was about to be condemned as unsafe, Ebenezer Buckingham and Company bought a controlling interest. Buckingham's son, Catherinus Putnam Buckingham, who had studied engineering at West Point, designed the new covered bridge.

While the bridge was under construction a flood threatened the supports under the eastern span. Ebenezer Buckingham hurried the completion of the work. Then he gave orders for the removal of the wedges which held the supports so that the flood waters could carry them away without taking the bridge. When the wedges were removed, the span fell into the river and Buckingham and ]acob Boyd were killed by falling timbers.

In 1832 the other stockholders completed the third Y bridge which stood until 1900.

On January 4, 1902, the new Y bridge was opened for foot passengers. Ten days later, streetcars and wagons started to cross without any opening ceremony.

Muskingum County people were proud of their new Y bridge. They boasted that it was the only Y shaped bridge in the world. To meet the competition of other cities, they started to call Zanesville "The Y Bridge City."

Zanesvillians liked to boast that they had a bridge you could cross and still be on the same side of the river you started from (by going from West Main Street to Linden Avenue).

In 1979 the fourth Y bridge was deemed unsafe and plans were made to build the fifth Y bridge. Franklin Consultants of Columbus stated: nothing of the Y bridge is salvageable above the piers "and that it is deteriorating rapidly and becoming a serious hazard."

Federal, state and local officials as well as Zanesville citizens who voted in 3 separate meetings, preferred a steel girder construction because it would be the quickest and least expensive to erect.

Federal, state and local preferences were disregarded. Historic Preservation authorities insisted the design of the new bridge must include the same type of railing, light poles and parapets which were included on the existing bridge during the original construction. These solid concrete balustrades were wiped out in the 1913 flood and replaced with pipe railings.

After the fourth bridge was demolished, a project inspector for ODOT announced that only the Linden span had needed to be replaced with the other spans needing surface repairs. A fellow project engineer and his superior, an engineer for ODOT, supported his findings. It was too late, the old bridge was gone.

In 1984 the city wanted to celebrate the opening of the new bridge. Democratic authorities announced the head of ODOT would preside at the Friday ceremony because the governor, Richard Celeste, had a previous commitment. The Republicans could not permit their rivals to be the first to dedicate the bridge. On Friday morning, October 5,1984 an unannounced parade led by former governor James Rhodes marched down Main Street. They cut the first ribbon.

On Saturday, October 6,1984, amidst much local gala, the Fifth Y Bridge was dedicated. ODOT then found defective expansion joints and the final ceremony heralding the actual opening of the bridge was held November 9, 1984.

While Zanesvillians were relieved to have the convenience of the new bridge, they were dismayed at the tunnel- like effect the bridge had. No longer could they see the convergence of the Muskingum and Licking Rivers through wonderfully open railings. Only a new generation will be able to completely accept the "bridge without a view" 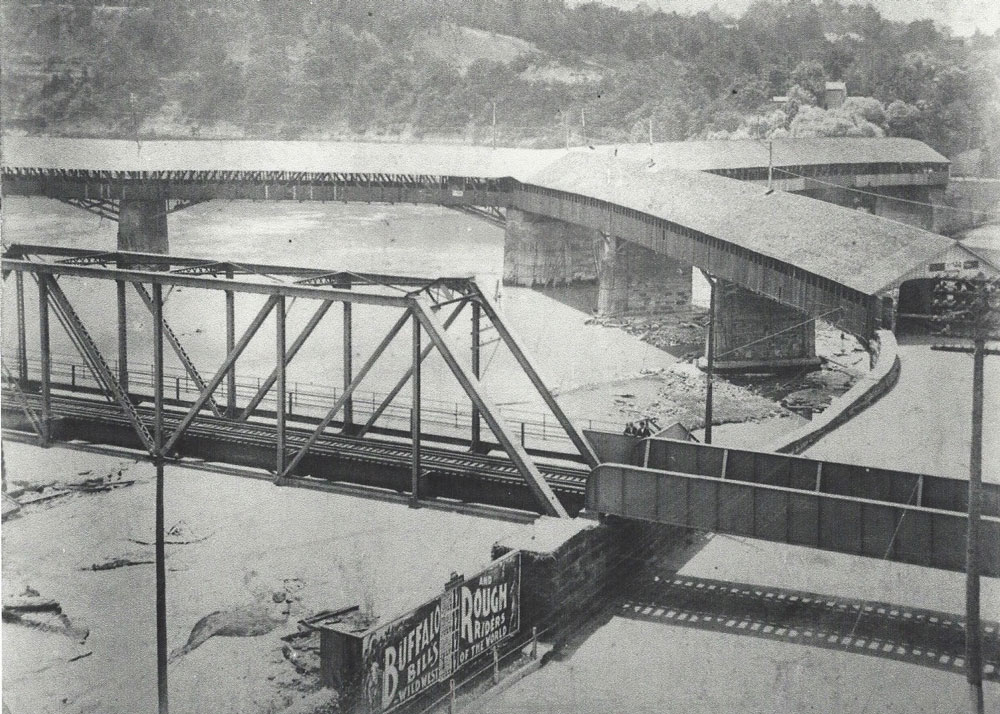 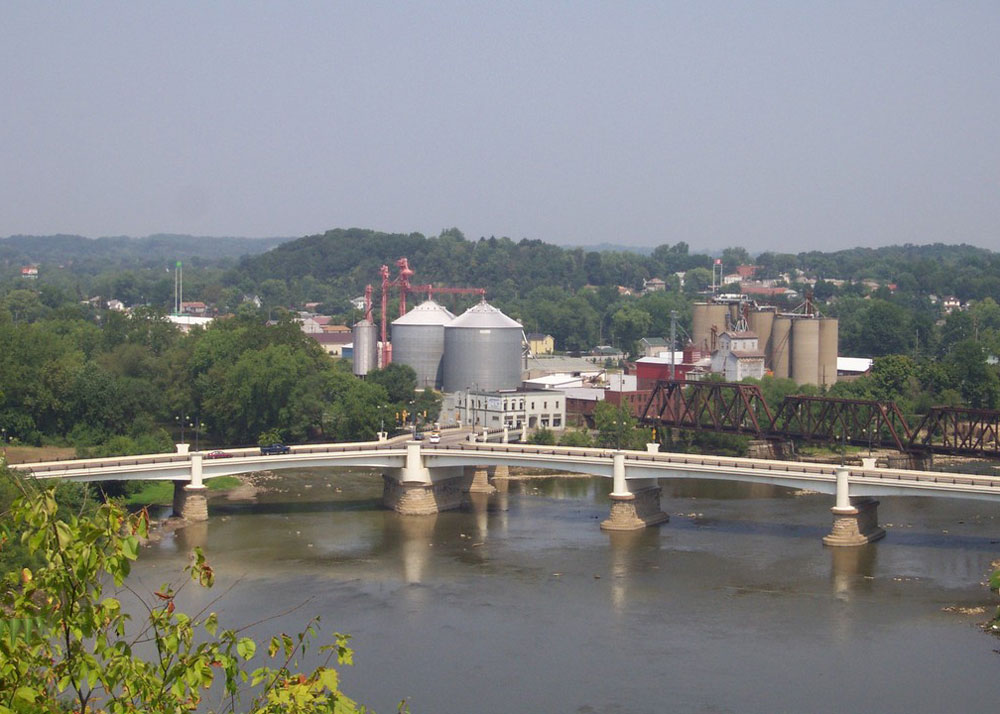 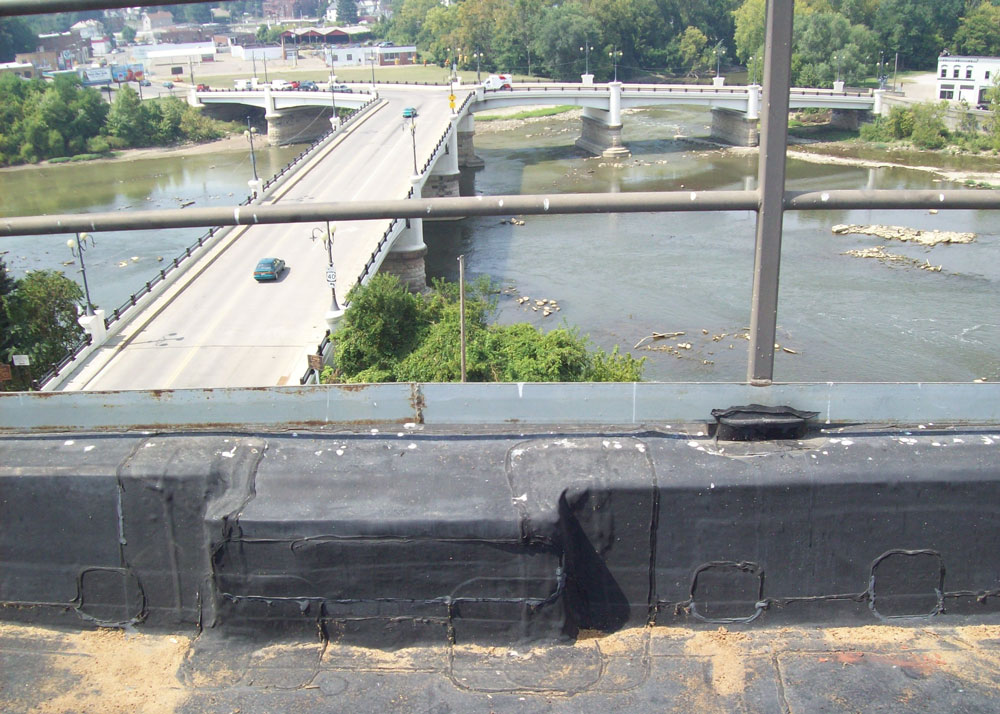 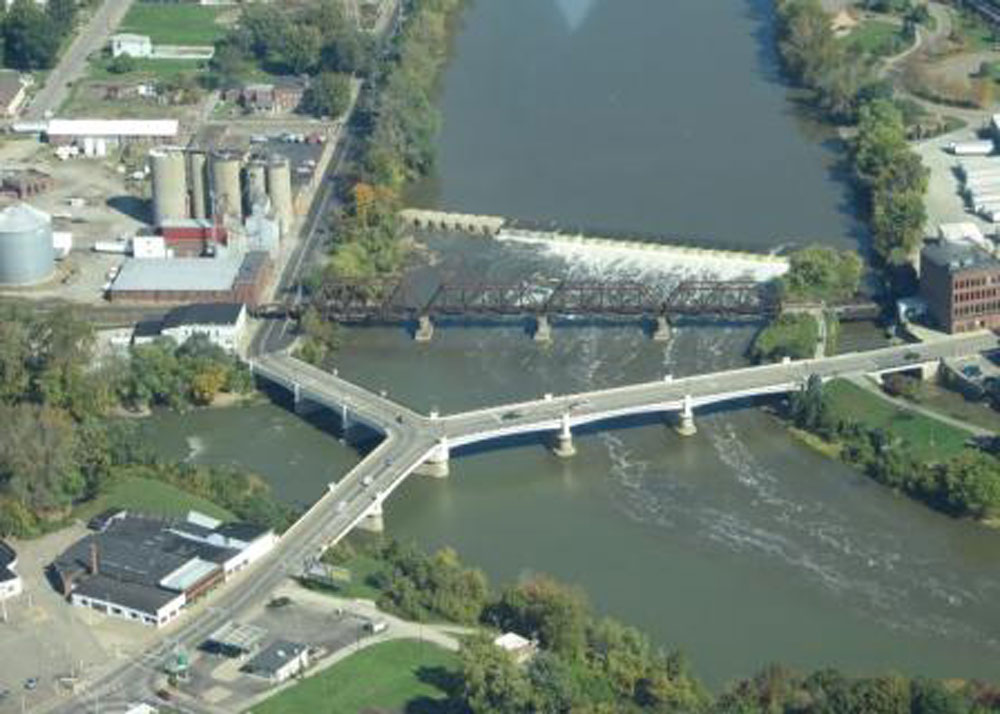 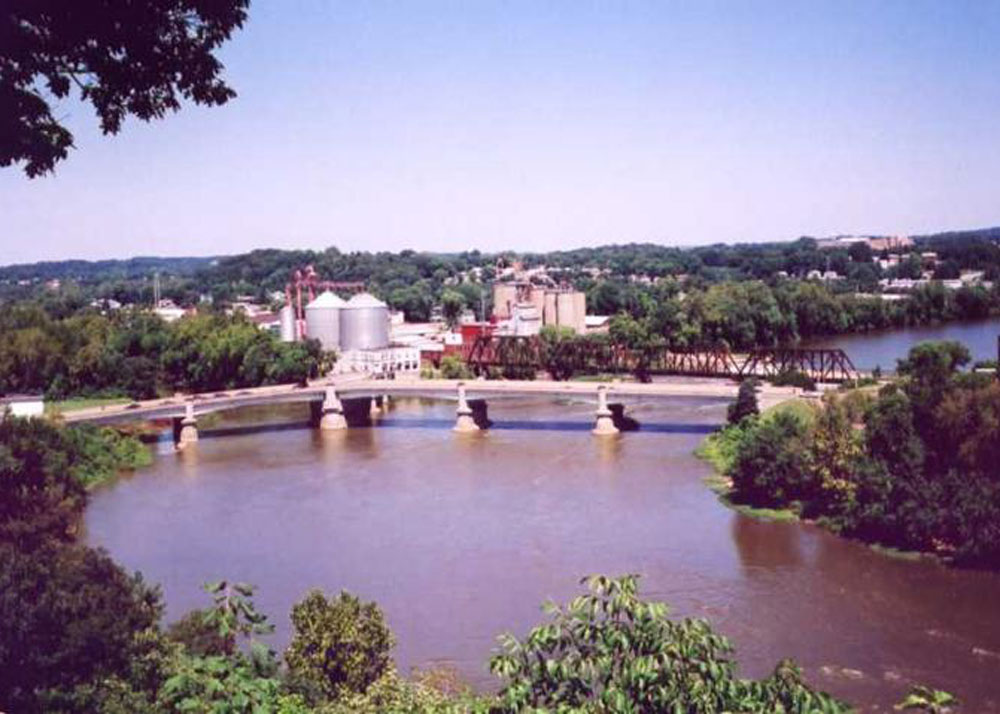 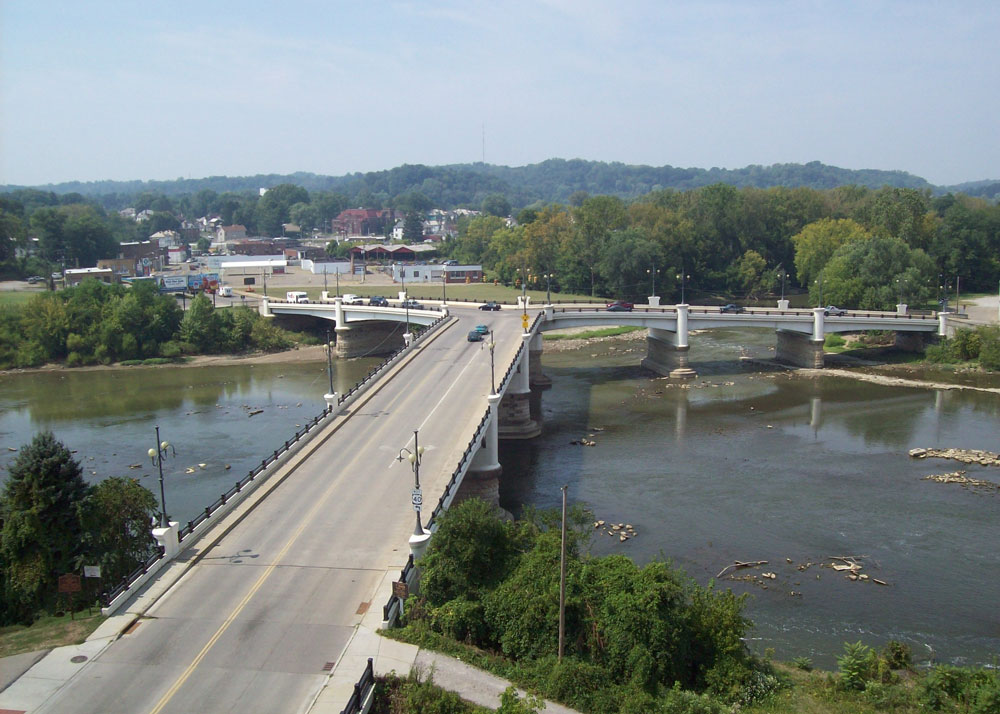 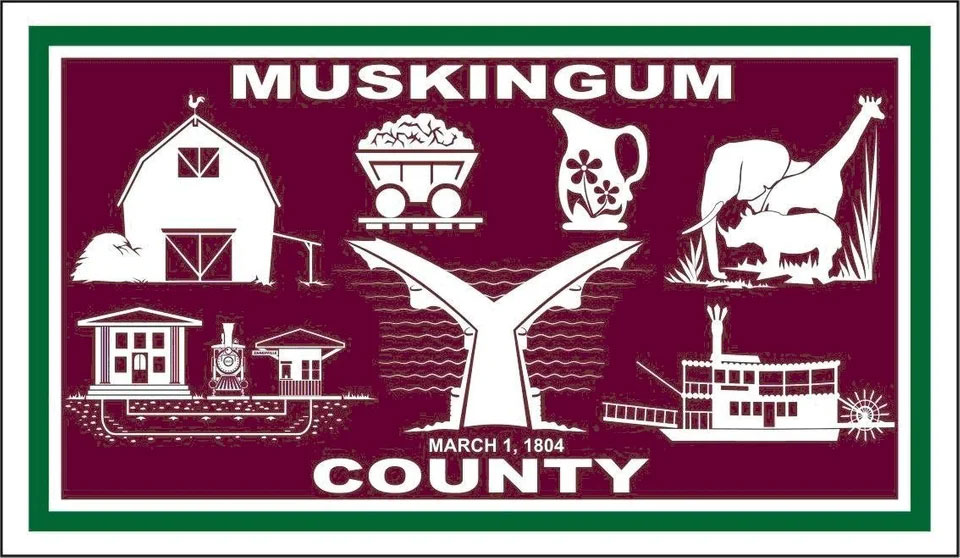 Many of the objects on the flag are quite obvious in what their relationship to the area, however, the center object that looks like a "Y" is a bridge. In the County Seat of Zanesville, is a bridge that splits into a "Y" as it crosses the river. Other objects include a barn for the local agriculture and steamboat for the river traffic.

On Thursday, April 25, 2002, the Muskingum County Flag was presented to the county commissioners at the Muskingum County Home. The flag was designed by local artist Roger Penos using the ideas of the residents of the County Home. Residents Helen Bartick and Lucille Wilson, who worked on the project from the beginning and attended almost every planning session, presented the flag on behalf of all the residents. Penos said working with the residents was wonderful. He would talk with the residents, sketch their ideas, and bring the sketches back for more comments and suggestions.

The flag is maroon with seven white symbols representing our county’s history. The field of the flag is surrounded by a green and white border. The symbols on the flag are the Y bridge, the Lorena, pottery, mining, the Wilds, the Underground Railroad and agriculture. The date Muskingum County was created – March 1, 1804 – is also included. The county actually has two flag designs. The one flown at the Statehouse for the Bicentennial Celebration is modified. On it, the barn which represents agriculture, includes the Bicentennial Logo.

The Muskingum County Flag was first raised and flown April 26, 2002 in front of the County Home in honor of the residents who designed it.

There are currently no county surplus sales scheduled. 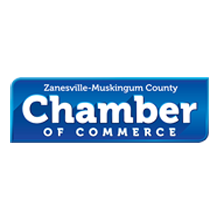 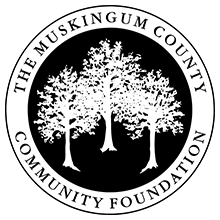 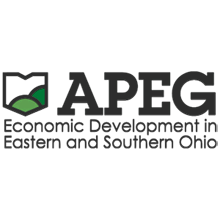 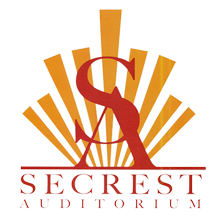 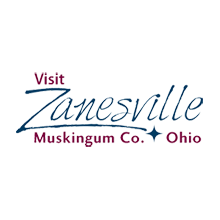 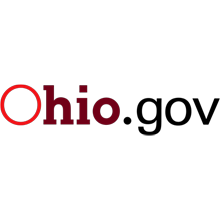 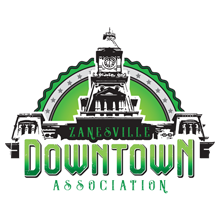 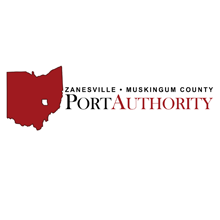